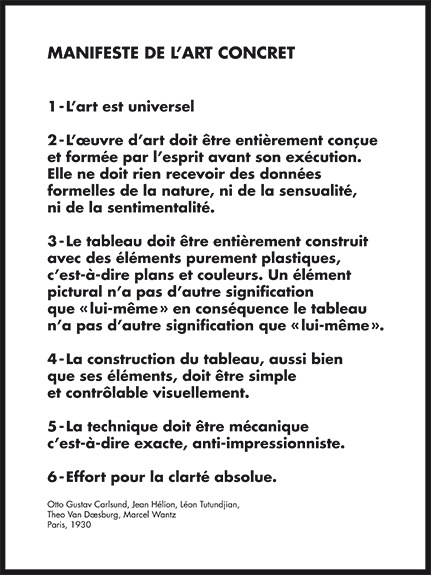 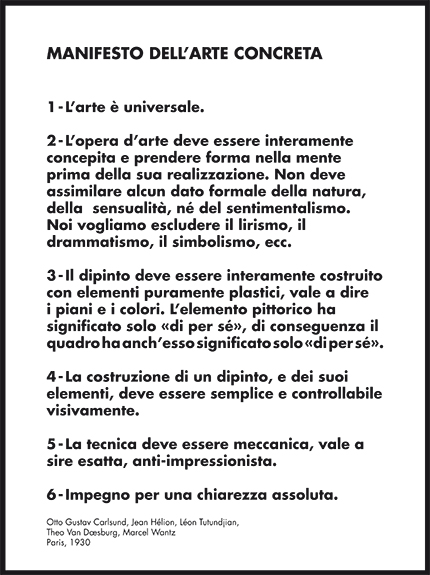 The eac.'s name comes from the historical artistic movement of Concrete Art.

The name appeared during the interwar period. Concrete art claims that it’s language is purely objective and independent from any references from reality, from the outside world. Opposed to figurative art and Abstract Art, Concrete Art detaches itself from the abstracts process existing in the real world, creating its own language based only on plastic elements (surface, shape, color) to obtain a clear geometric principle.

« Concrete painting, not abstract, because nothing is more concrete, more real, than a line, a color, a surface » (Theo Van Doesburg)

The Concrete Art group was established in 1930, initiated by Theo Van Doesburg, and included Jean Hélion,Otto Carlsund, Léon Tutundjian et Marcel Wantz. Those artists wrote a manifesto in the unique edition of their journal, in which were set 6 principles being the basic movement theory.

The Concrete art approach is to consider painting as a mind creation : painting means have to be reduced to the essential, technic and forms controlled for total clarity. This approach was in perfect continuity of the rationalistic and scientific tendencies, being developed in every areas at that time.

The expression « Concrete art » was then adopted by Wassily Kandisky in 1938 and by Jean Arp in 1944, to define their works.

The Swiss artist Max Bill has made a strong impact on the movement, from 1936, spreading in Switzerland the Concrete Art principles, thanks to different events and publications. He released in 1944 a significant text: la Pensée mathématique dans l'art de notre temps, which changed the mathematical conception into an artistic experimental approach. In this case, art works, according to Max Bill, « avoid the abstraction » as « they are made from their fundamental means, and have their own laws, with no external references to natural aspects. »

These principles are in the continuity of social project renewing the Bahaus ideas, as well as those from the constructivist and productivism movement in Russia, and the unism movement in Pologne. Indeed, Concrete Art principles can be applied to other areas, concerning directly the reality and the society, such as typography, architecture and design. Therefore, it's about « creating a measurable art, able to touch anyone, with shapes that could be adapted to any situation, understandable by any spectator, to create a universal language, similar to the scientific or the musical one. » (Serge Lemoine)

After the year 1945, Concrete art was spread out Switzerland, thanks to exhibitions and papers : consequently, in Buenos Aires, Arden Quin and Giulia Kosice started the Arturo group in 1944, which is known in particular thanks to a magazine with the same name, and then in 1946 the Madi group is also started, which works were exhibited at the Salon des Réalités nouvelles, in Paris.

The takeoff intensified particularly in Europe during the 50s and the 60s : the ZERO group (Heinz Mack, Otto Piene, Günther Uecker…) and the GRAV group (Julio Le Parc, François Morellet...).

During the same period, Concrete Art extensions were developing themselves, as Concrete Art principles can be found in Carl Andre, Dan Flavin or even Donald Judd's works.

Due to this large expansion Concrete Art, understandable and accessible to anyone, affirms itself in developments such as international art, pushing the universality's utopia from the beginning to come true.

The Concrete Art name ended up designating an important part of the geometrical abstract works produced after the war. Ignoring compartmentalization, Concrete Art brings together artists coming from different horizons and generations. They rethink the basic principles, criticizing them sometimes, confronting them, and/or enriching them by integrating nowadays concerns and new technologies to those bases.

In this way, Concrete Art tend to a universal language, as poetry or music, privileged areas for extensions or connections.